That's me on the left, with one of our awesome unit technicians Jim and one my classmates, Devon.

The project list around the Horticulture Unit has grown from legal pad size to novelty scroll that keeps unraveling. One project in particular has consistently remained in the background – our swale. The swale follows the lower fence from the southwest to southeast corner of the unit. Its design and installation have taken weeks, and while the end result may look just like rocks in a ditch, it’s unfortunately not that simple.

The project began by marking out the length and general shape the swale would take; this was accomplished with spray paint (to mark the swale’s center) and wooden stakes (every 20ft to help gauge an even finished grade). The swale begins at the southwest corner of the Unit, meandering along the fence line until its conclusion near the base of the orchards. Stakes were placed every 20ft and using our surveying equipment, marked to ensure a 2% drop. This gradual slope is steep enough to move water without it becoming stagnant, and shallow enough to avoid erosion problems. Using the bobcat’s bucket attachment, the swale was graded and cut to the approximate shape it would take.

Looking from the beginning of the swale outwards with grading stakes in place.

The next big step was to install a French drain running through the center of the swale. Using a variety of machinery, a trench was excavated through the middle of the swale, which subsequently required some handy shovel work to ensure the bottom of the trench was deep enough and at the 2% incline needed to move water through it.

Dr. Lewis surgically carving out our trench using the bobcat attachment after our Ditch Witch took a breather. 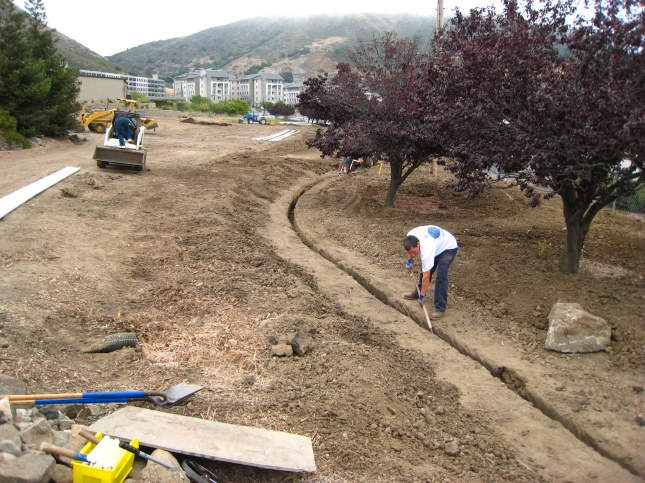 Work ethic is exactly what like to see in my professors.

Before we laid pipe, we filled the trench with a layer of gravel to prevent the perforation on the bottom from clogging. We then laid in the hundreds of feet of 3” perforated pipe into its new home, which we then buried with another layer of gravel.

The finer gravel allows for water to percolate through while excluding debris from entering and clogging the drain.

With the French drain successfully buried, we then went to work beautifying the swale. Using 2-4” rock, we littered the swale to mimic a natural, flowing stream. We scattered bigger boulders along the edges for the swale to bounce off and flow around, giving it a natural feel, along with medium sized rocks all throughout. 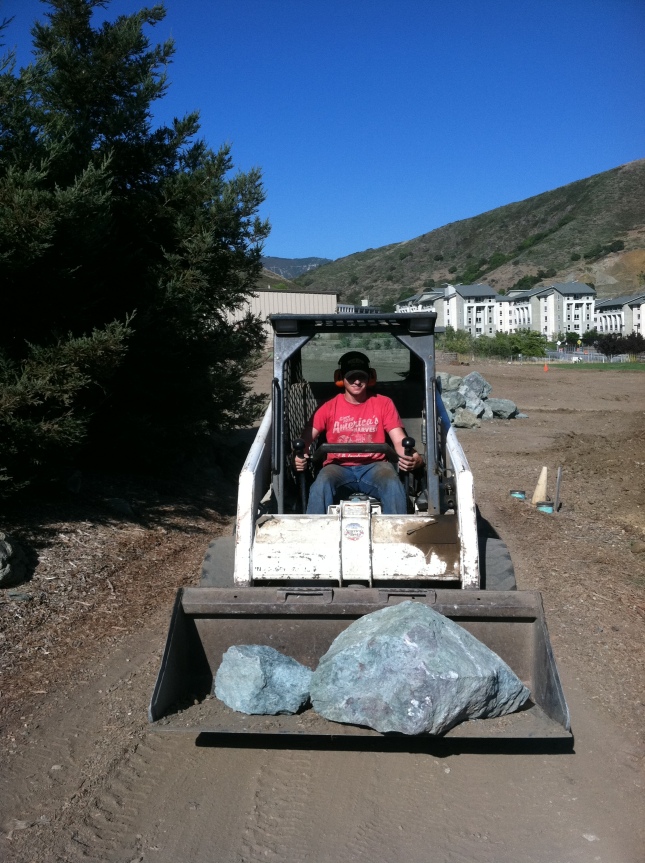 Moving the large boulders to their final destinations.

All of our nice rock comes from Cayucos. From the 2-4” rock filling the swale, to all the massive boulders bordering it, each type is chosen to display the native geological qualities of our area.

The process of dumping 2-4” in between medium sized, and maneuvering around the behemoth boulders, continued repetitiously for days.

Finally, after everyone had successfully broken their backs moving rock for days and days, we finished. Awesome.

As much of the "Swale Crew" as I could gather at that point in time. Well done.

Posted by Cal Poly Hort & Crops on October 24, 2011 in Uncategorized

For those of you who don’t recognize the pictures below, you’ve obviously been away from the Horticulture Unit for too long. The bottom half of the unit, a.k.a. the “Amatoscapes,” a.k.a. senior-project-graveyard, is getting a much needed face-lift. It’s all-hands-on-deck for those of us working at the Horticulture Unit this summer. While it’s only been a couple of weeks since the project began, the landscape is hardly recognizable- suffice to say, we’ve been busy.  The senior projects that once littered the area have been removed in an effort to create a more uniform landscape- reaching from below the service road entrance to the base of the Disease and Pest Lab. 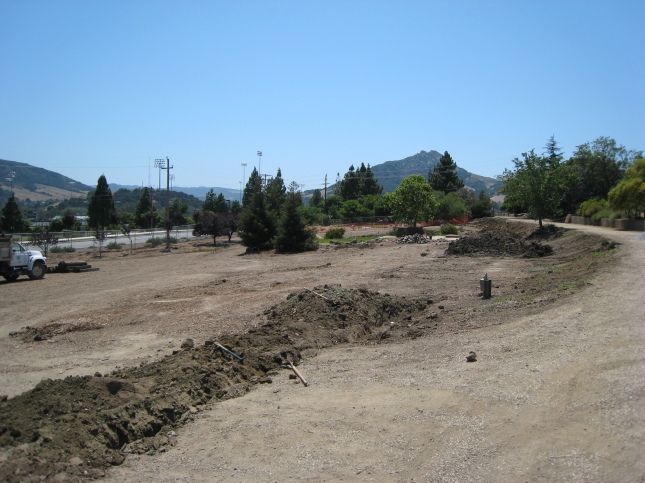 Looking down from the northeast corner of the site.

The last remaining island of green, and will be the only landscape section to be incorporated into the final plan.

The major project thus far is the installation of a new French-drain following below the service road. Without this drain, our natural ground-water would, will, and has been seeping into all trenches and low spots below. This is a problem when you spend all day digging, and then come back 24 hours later to find your holes filled with water. The perforated drain pipe will be buried (with a gravel buffer surrounding it to reduce clogging), so water may seep into, and then flow down the pipe to the desired outlet. 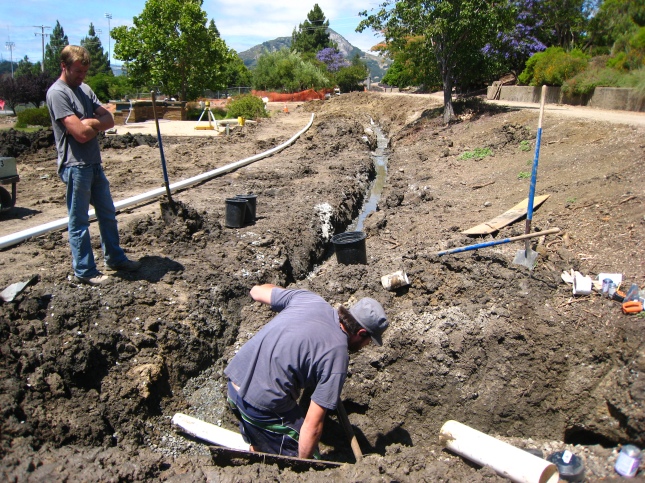 The dirty job of installing the drain pipe was made that much more fun when the trench filled with water the day after it was dug. The bottom of the long PVC pipe has perforations to allow the water to infiltrate and run down along the bottom.

As a side project, the narrow pathway leading to the green waste bins is being widened. This accomplishment would allow carts to pass through instead of having to make the trek through the arboretum and around the back. Awesome? You bet.

No, no one ran into the wall with the Bobcat- we tore out the old concrete retaining wall to make way for a new, wider pathway.

Posted by Cal Poly Hort & Crops on October 18, 2011 in Uncategorized

“What Happened to My Summer?”

Now that the first week of school is over and done with, I am currently feeling like, “What happened to all my summer?” So , I had to remember what I had  accomplished this past summer. During the beginning of summer, I went down south to visit my family in Palm Desert, California.  I went to see my new cousin that was born in late June. It was very nice catching up with my family.

Soon after, I  got a call from  a family friend asking me if I was interested in joining an internship. I accepted the offer right away. The internship dealt with helping the community and creating events to help the youth succeed in life. I helped plan a “Kids Fest” to motivate underprivileged kids to continue education.  I met a lot of politicians and important people.  I often felt out of place due to the fact I was the youngest out of everyone.  Once this two month internship was over, I had met many important people, from local farm workers to senators, which covered the whole spectrum.  Then, I was invited to tour the State Capitol in Sacramento too and it was a blast.

Here is a picture of me with Assemblymember Ben Hueso & his personal assistant Mr. Cruz from San Diego, California.

Once my internship  was done, I was grateful that I had met many great people and made an impact in the community.  I had a lot of free time on my hands, so I decided to go help my mother at her work.  My mother is a teacher, community liaison and local leader.  One the first day, when I went into my mom’s classroom, all of her students gave me a funny look.  So I decided to do “tricks” as the kids called them to get their attention.  During recess everyone was playing, so I went on to the pull-up bar and did a couple of pull-ups. Everyone surrounded me like there was a show going on. Then I did more difficult ones, like one handed pull-ups & pushups.  I did every pushup type possible. Soon after kids were trying to do pushups and pull-ups which made me happy.  The  last day I went to see the kids, I bought them  snacks and  pizza as a reward for doing more physical activities.  I believe that I especially influenced the young boys that don’t have a big brother role model. Only time will tell — hopefully I am right.

Posted by Cal Poly Hort & Crops on October 10, 2011 in Uncategorized

Hey all, my name is Chris Scott. I transferred to Cal Poly a year ago now and am an Agricultural and Environmental Plant Sciences major. I am chugging down the road to becoming a PCA (Pest Control Adviser). Coming from Sacramento’s suburbia, my thoughts about plants were always in the background – I mean literally, they were just things in the background. So to say that I learn something new every day is an understatement – and this is what I love about the Horticulture and Crop Science department. Between classes, clubs, farm, and arboretum work, I’m on campus dawn till dusk – so if you squint hard enough you’ll always find me around somewhere.

Working at the arboretum on Cal Poly's campus!

Posted by Cal Poly Hort & Crops on October 3, 2011 in Uncategorized